Today, people are living longer than ever before; thanks to the staggering development of technology and the healthcare system, life expectancy is rising every year around the world. Along with the good news of improving life, longevity comes with the bad news. The expenses and effort required to manage the aging population have also been extended, which has become a headache for many countries.

With a falling birth rate and rising life expectancy, a large proportion of income taxes in countries go into pension and retirement funds. The most common model for pension funds that have been subjected to a lot of debate and criticism is “Take from Peter to pay Paul”. Moreover, there are many countries today where pension systems are considered questionable and can be easily corrupted by the wrong people in the government.

1. Challenges in the Welfare System

The pension crisis is emerging around the globe, even in the most well-developed countries. In 2018, the United Kingdom estimated its retirement saving shortfall to be around $4 trillion, with a projected annual rise of 4%, where experts predict the statistic would reach $33 trillion by 2050. Even in Spain, where there used to be a pension surplus of 66 billion euro, has now almost completely depleted the funding within just 2 years. The US is not an exception to this in which many states stand the risk of being bankrupt due to retirement saving shortfalls. The Wall Street revealed that the smallest state pension funds gap stood at US$335 million in 2016. At the same time, the World Economic Forum has projected that in China and India, countries with the world’s population deficit stand at approximately $400 trillion by 2050.

The current pension system, which has been around for too long, is no longer functional. While retirement becomes longer as well as more expensive as life expectancy rises, cost inefficiencies and mismanagement within the pension funds systems send many people to the verge of not receiving their savings at the end of their career. As the older generation struggles to get their savings back, the young generation finds it extremely difficult to save enough for the future as property prices soar together with rising living standards.

The lack of transparency is considered to be the underlying cause of the pension crisis. As much as people need straightforward guidelines and information to plan and safeguard their retirement future wisely, it is still challenging to fully understand the mechanism and advantages or shortfalls of various pension programs offered nowadays. On the survey conducted by Pensions advisers Portafina, out of 2,000 respondents, the majority admitted that they don’t even understand the pension plan being applied at their workplaces.

Not only is it hard to gather accurate information regarding retirement savings plans, but changing pension plans is also a hassle. In most cases, employees find the plan-changing procedures extremely complicated and tiring, which leads to many people end up choosing or staying in a poor-performing, old-fashioned plan to avoid the complexity.

2. Blockchain as a Solution

As critical as the problems we are facing, it is nowhere near unconquerable. Blockchain technology, being considered one of the most disruptive ventures of the century, has huge potential in resolving the current pension system. The beauty of blockchain technology lies in its decentralized nature. As a public ledger, there is no central control over the system, while all the information logged in can not be altered or deleted. This transparent, decentralized ecosystem is vital to manage pension funds.

A block-chain based retirement savings ecosystem, utilizing smart contract technology, would allow encryption and perfect forward secrecy that would allow funds to be exclusively delivered directly to the beneficiary. Only the intended receiver can decode the private message and receive the funds. This process can greatly eliminate the risks of funds invasion or under-the-table costs during the transferring process.

Moreover, once all the information regarding pension funds as well as successful past transactions are logged on the blockchain ecosystem forever, switching between plans and gathering information would no longer be a challenge. Even if the user changes their job, workplace, or pension plans, no funds or past payment records would be lost or hard to trace back.

Thanks to the decentralized and transparent features of blockchain technology, a blockchain-based pension system means that anyone and everyone can rate on different funds provider and these reviews would remain unaltered forever, which gives employers much better insights into various funds options to make the most suitable choices as well as minimize costly misinformed mistakes. This high level of transparency would also incentivize institutions to improve their accountability, efficiency, and the delivery time as the competition between funds providers increase significantly.

Considering the need for mass adoption, the pension ecosystem should be accessible for individuals on smart devices. This requires the deployment of a portable digital wallet, with all the details regarding the past personal pension contributions and private savings and cooperates’ contributions. All these would mean that companies would not have to trace every new employee’s pension contributions back from the beginning of their career path, by going through a wide range of procedures and authorities.

It is hard to imagine how detrimental the pension crisis can become if we do not take action immediately. Independent Age, an older people’s charity reported in May 2019 that 1.3 million people are not receiving their entitled pension funds in the United States. A large proportion of the aging population would end up being in a tragic state, in which they have little to no money after their retirement due to the pension saving shortfall, and the young generation would soon be affected too. The blockchain technology solutions definitely would not be one-night magic that completely resolves all the existing issues of the current pension system. However, rebuilding it from the ground with this new technology would fix many expensive leaks in the pension pipelines today. A transparent, smart-contract-based retirement savings system would regain the trust of users in the digital era and ensure that our aging population will have a brighter after-work future.

As one of the leading Blockchain Technology Agents in the region, credited as the top 3 “Blockchain Development Company” in Viet Nam by GoodFirms, Sota Tek is confident to become your trustworthy partner in Blockchain-related Projects.  Our team of experienced developers provided clients worldwide with high-quality, innovative Blockchain Solutions for various industries.

If you are looking for an IT outsourcing agency that helps integrate Blockchain into your system or develop Blockchain solutions, contact our expert to explore the best-in-class solutions for your enterprise now!

Educational technology (ed-tech) has taken significant steps in the previous 20 years, however, a long way to complete ... 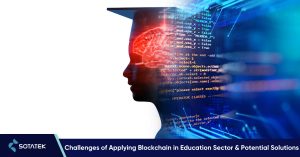 Blockchain is a new way of thinking about how school systems may manage and utilize data online for students (and even ... 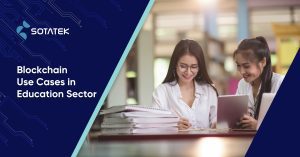 Here are 5 Blockchain Use Cases in the Education Sector

Blockchain technology is going to change the world around us. In the education sector, it can issue unique digital assets ...

Discuss With Us Now!